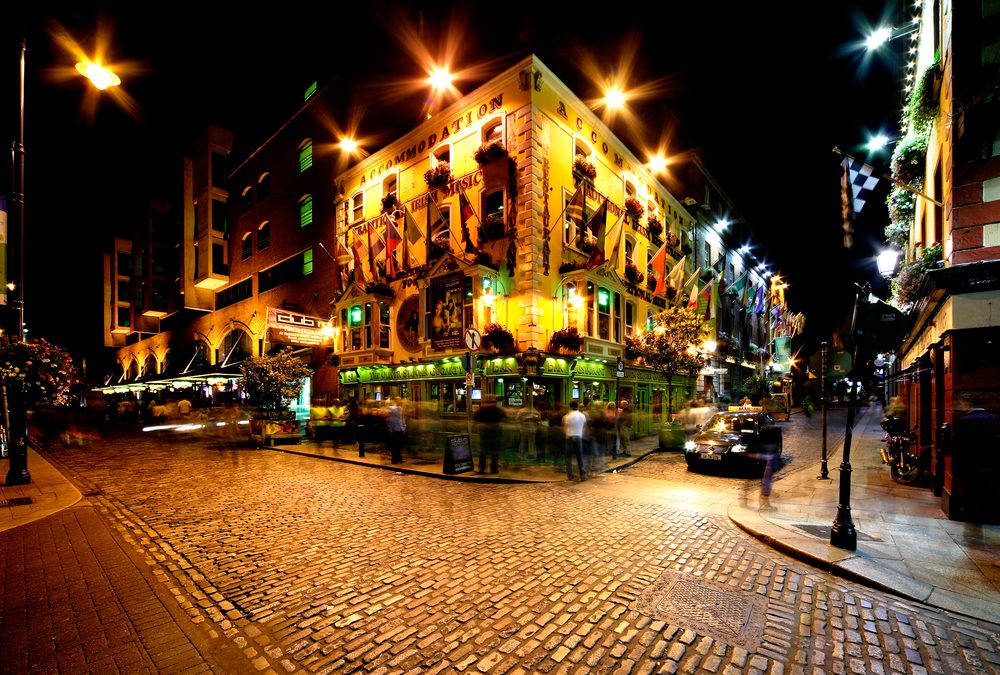 Although the Temple Bar District in Dublin is known today as the heart of the city’s art scene and famous bars, Temple Bar wasn’t always the trendiest area. Not even 50 years ago, it was a district that most Irish locals would have never stepped foot into unless necessary. Learn more about Temple Bar’s convoluted history from undeveloped marshlands to seedy urban decay, to the must-see destination it is today.

Not a lot is known of Dublin’s Temple Bar history before the 20th century. In 1592, the nearby Trinity College was founded by England’s Queen Elizabeth I. This very likely prompted wealthy and prodigious British and Irish families (such as the Temple family) to relocate to Dublin and build large estates over the course of the 17th century, along the south bank of the Liffey River (what is now known as the Temple Bar area).

Over the course of the next century, the Temple Bar area started to decline and lose its original prestige as it began to house seedier businesses such as brothels. The nearby areas both north and south of the Liffey River became known as Dublin’s very own Red Light District.

By the mid 20th century, Temple Bar’s reputation had only continued to decline and for much of Dublin’s history, the area was in disrepair marked by seedy businesses, abandoned historic buildings and poor living and working conditions.

Over the course of the 1990s, Temple Bar flourished into the area it is today; the remaining historic buildings were restored and filled with bars, restaurants, shops, art studios and apartments.

Finally, after years of reviewing and deliberation, Dublin’s city council chose to divert funds into reviving the Temple Bar area including offering financial help to businesses and renovating the streets to the picturesque cobblestone it is known for today.

Overall, Temple Bar has gone through colossal transformations over the years, from being an empty marshland overflowed from the Liffey river to housing some of the country’s wealthy to being a booming developing commercial center to a seedy site of urban decay.

After years of development, Temple Bar is now known as Dublin’s artsy and trendy neighbourhood, making it one of Ireland’s hottest local art scenes and a tourist hotspot for visitors looking to take in the country’s rich culture and cuisine all within a few blocks.

Activities and Things To Do

Temple Bar has certainly earned its name as Dublin’s artsy and ‘bohemian’ district, with many different entertaining arts activities in the daytime all within a few downtown blocks.

To soak in some of Ireland’s local culture, head to the Irish Film Institute where you can escape cold, rainy days with a screening of an independent Irish film you often won’t have access to anywhere else.

Afterwards, you can try a coffee or just take a peek at the Film Institute’s cafe to get a taste of the rich cafe scene in the Temple Bar area.

For visual art lovers, be sure to take a stroll through the area’s various art galleries as well as the National Photographic Archive, DESIGNyard, the Project Arts Centre and Temple Bar Gallery + Studios.

If you can only visit one artsy location while in Dublin, be sure to visit Meeting House Square where you can enjoy free film screenings, concerts and art markets.

After a day of soaking in Ireland’s rich art scene, depending on what you are craving, there are so many delicious restaurant options. One favourite is Quays Bar, which has a wide range of dishes including many traditional Irish meals which you can enjoy alongside the live music which begins every afternoon at three.

Although the bars will fill up in the evening, Quays Bar is a great place to get a traditional Irish coffee and a filling lunch or early dinner.

No matter what you are craving, Temple Bar is sure to have a restaurant that will serve up a delicious portion of what you’re looking for. Visit Elephant and Castle, which serves incredible ‘American-style’ chicken wings or Queen of Tarts, which is known to have Dublin’s best cheesecake.

Although Temple Bar is chock filled with various entertaining daytime activities, the area is really known for its exciting nightlife. If you stay around past the evening, you can gradually watch the area change for the pub crawlers and party animals.

The Temple Bar area has bars, pubs and clubs for whatever vibe and mood you are in. The Oliver St. John Gogarty features a hostel upstairs which contributes greatly to its young, fun vibe.

On the other hand, The Porterhouse is a chain bar that brews its own beer, making it perfect for beer enthusiasts looking to try a classic quiet Irish pint alongside some of the country’s traditional dishes.

If you are more of a Whiskey drinker, try the historic 19th century Temple Bar Pub which features a massive Whiskey collection.

If you are in the mood for it, try pub/bar hopping amongst the different spots mentioned and be sure to hit The Auld Dubliner and Teac Na Céibe, where you might run into crazy bachelor or bachelorette parties known respectively as Stag Dos and hen parties.

If you are more in the mood for dancing, hit up The Purty Kitchen or The Workman’s Club which are located right in the central Temple Bar area.

The Best Time to Visit

The best time to visit Temple Bar truly does depend on what you are looking for. On weekdays, the Temple Bar is no different than any other part of Dublin – bustling, but not overly crowded. This means you can easily get into just about any restaurant, bar or gallery you’d like and have some quiet amongst locals.

Over the course of 7-10 pm, Temple Bar truly begins coming to life. After 9:30-10 pm bars, pubs and restaurants will be crowded with parties, tourists and university students.

On weekends, which run from Thursday to Sunday in Ireland, Temple Bar is busy even during the day as tourists and bar hoppers flock to the entertaining streets, some planning to spend the entire day partying as places open up.

If you are looking to stroll through the streets, visit the galleries and soak up some Irish culture without any hassle, visit Temple Bar on a weekday. On the other hand, if you want to get a taste of the Irish nightlife, packed streets and crazy live events, try a weekend night on the town.

Overall, Temple Bar District is a charming area in Dublin that’s certainly worth visiting. Although it may seem like somewhat of a tourist trap, it attracts tourists for good reason, so don’t let the other travelers deter you from strolling through the picturesque streets and soaking up some Irish and uniquely Temple Bar culture.